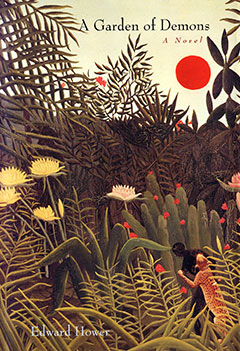 A Garden of Demons

Modern terrorism, like ancient beliefs in spirits and ghosts, thrives in lush, beautiful Sri Lanka, the setting of Edward Hower's new novel, A Garden of Demons. There Lila, a gifted half-American girl, begins to see her once-idyllic world in new ways when her Uncle Richard, just out of prison in the States, joins her family on a visit. Though he seeks peace in her parents' jungle nature sanctuary, Richard must instead help them to confront the dangers which threaten to destroy their home and, with frightening intensity, put an end to Lila's innocence.

In Sri Lanka in 1998, young Lila lives in what would be considered paradise. Her American mother and Sri Lankan father, a landowner committed to creating a nature preserve on his part of a plantation to protect rare plants and animals, dote on her. But when Lila's American uncle comes to visit, it becomes obvious that their sense of safety in the face of civil war and terrorist acts is an illusion. Her father's dream is hopeless, more a metaphor for what he hopes for his family than a realizable reality, and his method of gaining government support is dangerously naive. Meanwhile Lila sees the world through an artist's eyes, and her work reflects the increasing clarity of her vision. The author is an artist as well, using language to make the jungle come alive, as he powerfully depicts beautiful colors, sights, and smells as well as the strain and stink of blood and explosives. Hower's novel offers a moving and important glimpse into a part of the world rarely seem, although its traumas are all too common.

The time-frame of Edward Hower's new novel is condensed to the few months in Lila Gunesekera's twelfth year, when her Uncle Richard comes to visit from America and everything at home begins to go horribly awry. Home is Sri Lanka, where Lila's American mother, Sue, and her Sri Lankan father, Derek, have a plantation that they are turning into a wildlife sanctuary. The time is 1998, and the Tamil Tigers are fighting the government for their own independent country in the north. The sanctuary is to be a safe place, where no killing of any sort is allowed: Derek's idealistic dream keeps him going, even though he is plagued by fears and migraines. As he converted to Christianity and his wife is foreign, he assumes that they will be immune. The idea of immunity and a naive belief in it are central to the book.

"Everybody knows the plantation's a nature sanctuary, a neutral place," Lila says at the beginning to Daya, their elderly sentry. "There's nothing here to interest any guerrillas.

"Daya isn't so sure. "I think it is a fine and beautiful idea," he said finally, "But the plantation should be pegged, just in case."

Pegging means hammering wooden pegs into the ground to keep demons away. Demons, guerrillas, the termites that eat their house, her father's mysterious head pains, the disappearance of her loved cat, Zelie - all these are things which Lila has to take on board, knowing already that nothing may be kept out, nothing may really be explained. She's a Sri Lankan girl, speaks Sinhalese, has a Tamil best friend, and she's used to the idea of demons and ghosts. But things begin to happen which build a sinister and fated atmosphere in her beloved home, and even the presence of her American uncle can't keep the sense of danger at bay.

Edward Hower once again roots his story so firmly in time and place that the reader is captured and kept there as surely as the little family are. The events build with subtle and ultimately alarming inevitability. The clinic in town is bombed, the school is closed, Lila's safe world is blown open, until a German neighbor is at last murdered in front of her. Richard works to convince his sister to leave, but Sue is sunk in meditation and a Buddhist acceptance which looks perilously like depression.

In all this, the vibrant Lila is growing into adolescence. Her old dresses no longer fit, her school friends are growing up - and then suddenly there is no school, no friends, no future except the horror of war. But she is an artist, and this will be her salvation. No matter how bad things get, she will draw them, paint the colors and shapes of the horror. It's a wonderful and moving portrait of a girl: tough, hopeful, intelligent and tuned to everything that goes on around her, Lila is a real heroine. By showing events entirely through her eyes, Hower has given them an unmediated intensity. He has managed a hard thing: to write about a child without making this a child's book.

"Years later, when Lila remembered her terrible last walk to the sanctuary's zoo, she recalled that the afternoon had suddenly turned fresh and clear, even beautiful." Hower here gives us in one compact sentence the foreshadowing of terrible things, the reality of beauty in the present, and the promise of a future.

Lila Gunesekera, the 11-year old at the center of this turbulant novel, is also called "Coconut" since she is hard-headed but "full of sweetness." She lives on the Sri Lankan nature sanctuary her father struggles to keep up during the continuing civil war between the Sinhalese (who are primarily Buddhist) and the Hindu Tamil minority. Her mother and her favorite uncle are American, her father Sinhalese, and her best friend at school Tamil, and Lila has developed a belief system that is an odd hybrid of Buddhism, Christianity, and Hinduism. (Among her many sketches is one of an airplane landing at the local airport with yakkini-belevolent spirits-perched on each wing.) In his seventh novel, Edward Hower demonstrates a sensitivity to small things-Lila's affection for her restless cat Zalie, and her delight in nature-that can soothe a young girl who is "affected too much by the moods of people near her." She takes pleasure in a Buddhist "demon ceremony" and suffers when a Tamil suicide bomber, "a teenage girl, thin, wearing glasses," destroys a health clinic run by a close friend's family. The marriage of history and fiction is often uneasy, but Hower makes a credible link between his story and Sri Lanka's political upheaval. The novel suffers only in that Lila's father and mother and uncle are more thinly drawn; their efforts to preserve their refuge seem trivial compared to the glimpse of the country falling apart all around them.