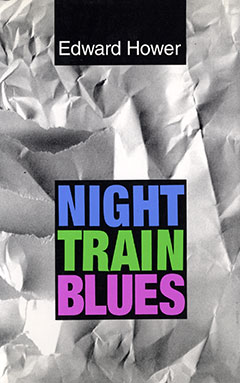 The beautiful house was full of secrets. "They collected along the clean white ceilings of the rooms like cobwebs that everyone pretended not to notice, " says Jerry, the appealing young hero of Night Train Blues.

This subtle and powerful novel is the story of a haunted, wealthy family whose mysteries Jerry tries to solve with his precocious imagination. Why does his father miss so many trains home from his New York office? Why does his mother hide in the bedroom behind a locked door? What makes his older brother, who inspires Jerry's obsession with jazz, keep running away? Even Jerry's adoring nanny won't answer his questions, but he has to know what's going on if he is ever to survive "the best childhood money can buy."

There's love somewhere in the house, but it will take extraordinary, perhaps tragic events to make it strong enough to bind the family together. Night Train Blues is an original, absorbing, and sensitively written story of adult passions and youthful rebellion.

A Fresh New Riff On Coming-Of-Age

Seen through the eyes of a child, even the most hackneyed of family situations can appear mysterious, unique and terrifying. In Edward Hower's fourth novel, Night Train Blues, a child grows up in a reserved, secretive, dysfunctional family that is near self-destruction. Ho hum. Been there, read that. But here's the good news: The book is breathtakingly fresh and gripping, and is informed by the recurring, improvised rhythms of jazz.

Jerry, the protagonist, is a bystander in his own life and an imaginary participant in the lives of others. Inspired by snippets of conversation or fragments of old photographs, he projects himself back in time - attempting to affect the turn that personal histories take. He visualizes himself present at his own conception. In a blending of photographs and remembered images he sees his mother, brother, and himself all at the same age. Later he envisions himself consoling his sad girlmother and telling her that she will escape poverty and have a big house in Connecticut. Unable to save her from her marriage arid her alcoholism, he tries to spare her the pain of her penurious youth. He tells her that one day she'll wear white gloves and elegant dresses and go to college. He won't, however, describe the rest of her college experience: "A provincial place where, her poverty showing like a rash, she has to wait on tables at the sorority and share a basement room with the cook."

The misery of his 1950s childhood revolves around the many trains home his father misses and the secret that his brother Robert discovers. The book is a quest for understanding. Throughout there are hints and accusations, but seldom resolutions. Flipping through the pages of the family album, he finds only "tantalizing scraps that made me want to scream with frustration. I realized I knew nothing about my parents' lives. I tried to imagine whole pictures in the blank spaces."

Jerry aches, too, for his nanny, Miss Gilly, who gave up her own chance for happiness to care for a child abandoned in the lap of luxury. He pictures her with a young British diplomat walking in Paris and even embellishes his memory of a childhood liaison with her. The line between fictional truth and fictional imagination is muddied. The narratives wind in and out, from here to there, present to past, from one character's life to another's. Jerry develops his obsessions in much the same way he improvises riffs on his piano.

If there is a hero in the story, it is Jerry's brother, Robert - Robert, who bequeaths to his little brother his love of jazz and baseball; Robert, who does the stupidest thing in his life when he tells his mother a truth that she has been drinking to avoid; Robert, who, confronted by the rage, fury, and sarcasm of his father, knows how to make himself disappear - in the attic, in the woods, later in boxcars.

Hower's writing is lush and lyrical. In an almost Oedipal imagining of the ocean cruise on which he was conceived, Jerry casts himself as a band leader crooning "Yes, Sir, That's My Baby," awarding first place in a dance contest to his parents and then observing his mother and father back in their cabin: "He raises the bottle. Champagne splashes over her. She screams, laughs, the bubbles sizzling on her bare skin."

Night Train Blues is a coming-of-age book that is weird, haunting, and magical.

Sheila Paulos is a writer who teaches in the intellectual heritage program at Temple University.