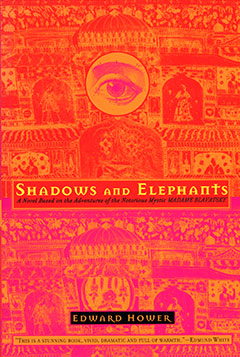 A Novel About the Notorious Madame Blavatsky
Based on the adventures of Madame Helena Blavatsky, the Russian-born seer notorious the world over for her claims to psychic powers, Shadows and Elephants draws us into the world of a free-spirited woman accused of being one of history's most accomplished imposters. Equally fascinating is her partner, a popular journalist based on the Civil War hero Colonel Henry Olcott. Beloved by Manhattan society for mystical gatherings in their exotic parlor, they leave America amidst a storm of controversy, and set out for adventures in the Orient on a quest for the secrets of Eastern wisdom.

Hailed by The Philadelphia Inquirer as a writer whose work is "Breathtakingly fresh and gripping...weird, haunting, and magical," Hower has written a novel about the rare and tempestuous friendship between a woman and a man who defined occultism in America. Shadows and Elephants is rich in contemporary resonance, for indeed, Spiritualism has survived for over a century, reshaped today in eclectic New Age beliefs.

Or purchase a signed copy of this book by contacting Edward at edwardhower@gmail.com.

A pair of 19th-century British spiritualists travel to India to meet the masters of their craft in Hower's latest, a historical novel loosely based on the lives of Russian-born mystic Madame Helena Blavatsky and her partner, Col. Henry Steel Olcott. a popular journalist and Civil War hero. Ben Blackburn is Olcott's fictional counterpart, a charismatic journalist whose romantic interest is piqued when he encounters Irena Milanova, a sensuous, passionate spiritualist whose work is becoming increasingly renowned. Milanova 's sexual hangups prevent them from consummating their affair, but the two become friends based on attraction and a deep spiritual bond that sends them off to India after they form a spiritual society together. Their journey is an up-and-clown affair that starts off with some successful promotional efforts, but problems surface when Blackburn becomes involved with a married British expatriate and Milanova's jealousy causes her to take increasing risks in her various miracle - producing sessions. Blackburn goes off on a bender of his own when he discovers what he thinks is a gift for psychic healing, but soon the pair find the integrity of their efforts being investigated by a committee seeking to expose them as frauds. Hower (The New Life Hotel, etc.) paints a compelling picture of the spiritualist movement and the celebrities it drew, but the best passages are those that delve into the motives and emotions of his two flawed protagonists as they learn why they are drawn to the possibility of miracles, astral journeys and psychic phenomena. This book works on two levels, as both history and character study, and it is certain to be a welcome addition to the small but noteworthy subgenre of fiction dealing with spiritualism. (Jan.)

Irena Milanova is a Russian emigre who makes her mark in late-19th-century New York society by holding seances that wow the city's intellectuals. Capt. Benjamin Blackburn is a Civil War veteran and a journalist, a man who is fascinated with the supernatural and accustomed to smoking out frauds. They should clash, but instead they click: Milanova wants a stamp of approval, while Blackburn secretly seeks "something more, something real." They become friends and then founders of the spiritualist Alexandrian Society. When chased from New York by scandal, they flee to India and finally Ceylon. Based on the lives of Helena Blavatsky (known as Madame Blavatsky) and her partner, Col. Henry Olcott, Edward Hower's fifth novel is an expert portrait of the era when hard-nosed science was moving in on spiritualism, a paradigm shift that would eventually relegate psychics and mediums to the fringes. Hower creates complicated characters in Ben and Irena, and convincingly manages their often tempestuous, though platonic, relationship. His lush portraits of Asia, as well as a lively cast of secondary characters, make this a rewarding, often amusing tale of religious and emotional discovery.

Of Mad Russian Women and Englishmen

After the Civil War in this country there seems to have been an epidemic of credulousness spread by a longing to get in touch with the recent dead - not surprising, at a time when families and communities had been split and so many young men killed, not abroad and out of sight but right here. I don't know if waves of interest in the occult and spiritualism usually follow wars, but it's an interesting line of inquiry.

Edward Hower's novel takes an ex-military man, Captain Ben Blackburn, and sends him stumbling out into the wilds of spiritualist experiment, in company with a magnetic but infuriating Russian woman, Irina These two are firmly based on two real, or rather historical people, the Civil War veteran Colonel Henry Steel Olcott, also a well-known journalist, and Madame Helena Blavatsky, famous mystic and spiritualist or famous fake, according to your point of view. Hower's access to their writings and papers, his discovery in Madras, India, of a 500-acre park which was the international headquarters of their organization, led him to the novel, in which the Theosophical Society becomes the Alexandrian society Blackburn and Irina take off to India and Sri Lanka, just as their original models did, and their goings on are investigated by the Society for Psychical Research.

It's a fascinating story, full of odd turns and surprises. My only question was, why not stay with the original and write it as non-fiction? But this was partly answered by Hower's novelistic ability to write about India, and partly by the way he refuses to comment on what's happening or pronounce the charismatic duo to be faking it at any point, however many "phenomena" Irina produces, china plates replacing broken ones, letters from the Masters appearing magically, transcribed by herself; objects whizzing through the all appearances and disappearances, all the bag of tricks through which she worked to keep herself in business.

The topic of the novel turns out to be the phenomenon of belief The reader's is tested time and again, as Irina weaves her magic and convinces most people that she's on a hot line to the Masters. The thing is, she evidently believes it herself and the more obvious "phenomena" are just seen by her as hors d'oeuvres to keep her fans eager for the main dish.

In Sri Lanka, Ben has a turn, believing himself to be a healer. Crowds of sick and disabled people flock to him, believing in his healing powers. For a while, he finds himself able to heal - and Hower gives us his inner processes as he does, feeling his innermost self flooded with compassion and able to reach out. Can we heal, when we feel ourselves so empowered, so connected? Evidently so. But it's when he begins to do it for selfish reasons that the power leaves him, and he has to flee Sri Lanka just as Irina had to flee India, to keep a doddering reputation alive and well.

What is the nature, really of these activities? Hower leaves the matter open, and this is why the story had to be written as a novel. We have Ben Blackburn's word, and we have Irina's We have the cast of surrounding characters, the young Indian acolyte Davidar who believed in them both so thoroughly that his disappointment nearly kills him, the young American Sarah who loves him, the Indian p people being stirred to increased nationalism by these Americans' sudden interest in them, the surly Brits who are busy trying to hold up the Raj and see the Yankee intruders as both dangerous and silly. It's all played out against the background of "The Great Game" as the Russian-British struggle for hegemony in north India and Afghanistan was called, and in the aftermath of a bloody civil war in the U.S. Ben and Irina have their struggles, their squabbles, they call each other "chum and have pet names for each other, they have one failed attempt at sex, after which Ben is fallen upon by other eager women, both English and Indian; they work to maintain what turns out in the end to be a power trip, rather than the noble devotion to world peace and spiritual understanding that they had envisaged. Noble ends often ignominious and dishonest means - this seems to have been the pattern of so many organizations set up to change the world. Sometimes touching, sometimes ridiculous, Hower's two larger-than-life characters have their heads in the clouds and feet of clay. The final image has Irina being hoisted into the air to board a ship, her blue umbrella floating off skyward. "A crowd gathered to watch Irma's ascension: such a feat of engineering hadn't been seen here before." Yes, she ascended but a tall steel crane was needed to make this happen. The underpinnings have showed. The two of them are human, after all.

In real life, Madame Blavatsky went to London, where the women's rights leader and birth control pioneer Annie Besant took up with her, and she met George Bernard Shaw and the young Gandhi. In the novel, she or rather Irina - is left literally in mid-air "Raising their faces to the sky, they searched the clouds for the elusive speck of blue." The speck of truth in illusion? The speck of hope? The speck of human dignity in the ridiculous? Or just an ordinary old umbrella, whirling off into the blue, itself alone, no tricks?