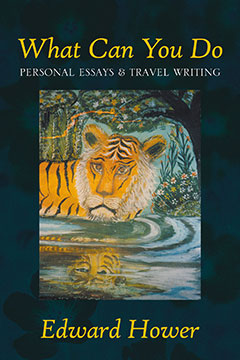 What Can You Do: Personal Essays & Travel Writing

These are some of the subjects in this lively collection of personal essays and travel writing – eloquent inner quests and journeys of discovery to out-of-the-way destinations.

"They didn't think of themselves; they thought of their great-great-grandkids—that's what they work for."

– A New York cabbie from Ghana (a fellow with two college degrees), talking to me last weekend about his countrymen's values.

As we spoke about how American students take their education for granted, I was reminded of the homeless African boys in Edward Hower's essay, "Forests of the Night," so terribly hungry for learning in the midst of social upheaval and chaos. This unforgettable memoir is the longest piece in his collection of 17 personal and travel essays, What Can You Do, recently published by local Cayuga Lake Books.

Hower already has eight novels and two volumes of stories in print. This is the first compilation of his essays, written from 1979 to this year. The pieces originally appeared in publications ranging from The New York Times to the Ithaca Times, from American Scholar and Smithsonian to River Styx. Many of them recall the travels of an earlier self, a young man desperate to escape what seemed a stifling and conventional home.

We get brief, telling glimpses of this troubled and restless youth, but the real focus is always on where he goes, what he sees—the "other" he's searching to lose himself in. As a result, we view these distant people and places with near–photographic clarity. Hower's style is straightforward and journalistic, but his descriptions go beyond documentary in their sensitive detail.

The book opens on a voyage much closer to home—the essay giving the book its title, which isn't a question but an admission of hopelessness. Living marginally, the college grad takes a job selling frozen meat to the rural poor. This comical tale of how he, his hapless employer, and fellow salesmen are all conned is so familiar, American, and painfully pathetic that we welcome his eventual trips to countries with fewer illusions.

Next follows a pleasant piece on being a supernumerary in the Metropolitan opera, then a memory of being feverishly ill as a child in Guatemala, where gunfire in the streets seems less threatening than parental tensions, and salvation comes in the form of a Nazi physician. Hower's life has been more eventful than most, and reading the essays, I felt grateful that he'd recorded these experiences, particularly those in other times and countries.

There's a long sketch about Belize and an account of trying to learn Spanish in Santiago, Chile. More deeply engaging chapters reflect Hower's years in India, especially Jaipur, as a Fulbright fellow studying folk tales, a few of which are included here. In various essays, he describes visiting a disabled village sign painter, a lonely woman seeking comfort in an unctuous guru, and the foster child in Mumbai whose schooling he'd sponsored.

India is all too easy to exoticize, but Hower's prose doesn't indulge, even when he ventures into places most alien and disturbing to us, and to him—a witch temple where the insane are brought to be healed; a prison where children are kept near their inmate mothers and somewhat educated, while in darker cells, near-naked men are crowded in subhuman conditions.

"Explorers of the Spirit World" fascinatingly recounts the career of Russian psychic Madame Blavatsky and her American colleague, Colonel Henry Olcott, a Theosophist who ended up founding over a hundred Buddhist schools in Ceylon. One strand linking many of these essays is Hower's investigation of belief and disbelief; of the spiritual world and its daily presence; and of the yearning to exorcise one's demons, whatever their form. Another dominant theme, inflected by Hower's awareness of "a bubble of white privilege," is education—the fragile but luminous relationship between eager student and self-doubting teacher. "Writing Dangerously" compellingly tells of teaching expressive writing to prisoners at Auburn—where the men, he says, are "as sick of living in a vicious, unfeeling culture as I am of reading about it."

But it's the young man's first faltering attempts at teaching in Uganda that, of all these memorable essays, will haunt you the longest. His students, Sudanese refugees, are boys with no possessions, separated from their families, excited to learn as a ticket to somewhere. Their voices and spirits simply blaze on the pages, and you realize Hower has, in fact, shown us what you can do.